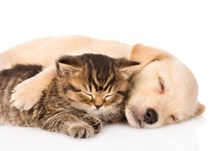 Here are 3 reasons why we believe
you and your pet benefit from spay/neuter:
For a Shorter version....click Hand-Out link buttons below!

Reason #1:  Surgery is safer than it has ever been.  Medical risks associated with your pet remaining intact ARE REAL. Both female cats and dogs that go through multiple heat cycles are significantly more likely to develop mammary (breast) cancer as they age.  This number just slightly increases after the first heat cycle but jumps exponentially the more heats your female pet goes through.  This type of cancer is metastatic and life threatening in a high percent of cases.  It commonly requires aggressive surgery to treat even in the benign form.  Even if your female dog is spayed later in life after these cycles have occurred you cannot take away the risk for this type of cancer.  Spays performed in the first 5 to 6 months of life can also make their recovery dramatically quicker.  In males, prostatic enlargement, straining to urinate, prostate infection, and perianal hernias are all "common" problems seen in un-neutered males.  Very recent studies have also shown that narrow urethras in cats and musculoskeletal diseases in dogs, as well as many other issues, once thought to be associated with early spay neuter (before 4 months of age), likely have no connection or significant differences in incidence.  IE...Benefits of spay/neuter far outweigh risks for your pet.


Reason #2:  Make your life easier while increasing your pets safety.  Intact male cats are MUCH more likely to fight (spreading disease such as Feline Aids (FIV) and Feline Leukemia as well as developing abscesses), "spray" around and inside your home, stray away from your house or try to escape to find females.  They are also more likely to encounter trauma such as being hit by a car, etc....  Female cats are also MORE likely to spray, escape or get hurt,  just as their male counterparts.  Female cats can stay in heat until stimulated, so their cycles can last extensive periods of time.  They will often cry and howl at night until they are bred, making it hard for you to sleep!


Just like cats, male dogs will often mark inside or outside the home as well.  Un-neutered males are also the large majority of dogs seen on emergency that are involved in trauma.  Jumping fences, digging out of yards and blowing by invisible fences is not uncommon in these boys.  Female heat cycles in dogs can last anywhere from 5 days to 3 weeks and can occur up to a few times a year in small breed dogs.  Diapers are meant for babies!!


Remember: Male and female litter mates if adopted together will often tie and produce a litter by the time they are 6 to 8 months old---some sooner!


Reason #3:  Better behavior is the Best!  It is difficult for anyone to keep a marking dog or a desperate howling cat in the house!  You can change that bad behavior and the good news is fixing those pets that are "lovey dovey" should not change their wonderful behaviors!  They still remain playful, fun, and cuddly.   When dogs remain unfixed,  humping behaviors, aggression, and difficulty with other four-legged fellow housemates are MUCH more common.  Once bad behaviors such as spraying or aggression have developed and established for just a short period of time, it can be very difficult to get rid of them.  Don't let these behaviors take hold: neuter or spay at 4 to 6 months of age and if you notice any of these behaviors prior to this time, call us so we can discuss early spay neuter or other medical issues that may cause similar symptoms.
Hand-out Feline Spay/Neuter
Hand-out Canine Spay/Neuter
So you are going to move forward....... good decision!  See our Maximizing Safety and Minimizing Pain Page!  Click link below:
Maximize Safety/Minimize Pain