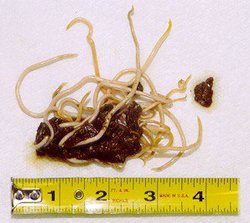 Photo courtesy of petmd.com
Living in our humid and wet climate with a plethora pets, lots of rodents, deer and other wildlife makes northern Ohio a great place to pick up parasites.  Dogs tromping through the parks, as well as in our favorite fad places, such as puppy parks or on play dates indoors, makes the likelihood of pets picking up parasites quite high.  Cats are also very susceptible because parasites or the eggs they shed can live in the grass, dirt and water around our home or other areas they frequent. Even indoor cats can be exposed by dirt on our shoes, clothing, or exposure to pets who do frequent the outdoors.


Parasites Transmissible to Pets and Humans:
Roundworms (Toxocara canis, T. cati):  The most common parasite found in dogs and cats;  Able to encyst in muscle tissue inside an animal to survive treatment and then come out during whelping to pass parasites thru mother's milk to puppies/kittens;  All pets should be dewormed as puppies/kittens and some pets who frequent the outdoors should be dewormed monthly; Eggs have hard shell that can survive months to years in the environment; Infection in pets can cause anything from no symptoms to severe diarrhea or pneumonia in kittens from migrating larval stages
Too see human risk; click here:
Roundworm Infection in People 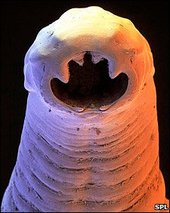 Hookworms:   Hookworms are smaller parasites than Roundworms and can only grow to be about half an inch long; Parasite attaches it's mouth onto the inner layers of the small intestines and suck blood/fluids from the host; Dogs/Puppies can acquire infection in utero through the placenta, from nursing their mother's milk, from soil, directly through skin/footpads or by eating and infected animal/host; Puppies are the most at risk for serious infections; Can develop bloody, wine colored or tar black diarrhea; Significant blood loss from the parasite can cause anemia and even death.
Hookworm Infection in People

Whipworm:  Whipworms are also a bit smaller than roundworms growing to be approximately 2 to 3 inches; One end of parasite considerably thicker giving them a whip appearance; Cause acute, chronic or intermittent diarrhea; Signs are typically more consistent with large bowel disease (mucoid and urgent/straining diarrhea);  More difficult to treat than other parasites due to location of disease (colon);  Humans can pick up whipworms from soil that is contaminated by an infected dog or other mammal host. Children are especially at risk. 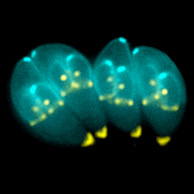 Photo courtesy of wikipedia.org
Toxoplasma:  Toxoplasma gondii is a parasite called a protozoa that causes the disease toxoplasmosis; primarily found in cats as host;  Passed to humans by cleaning litter box gardening, etc without good hygiene practices;  Toxoplasma is often picked up by ingestion of mice because they are what are called and intermediate host;  Infected cats are often asymptomatic;  One of the most common parasitic infections in the world

Tapeworms:  Tapeworms are typically picked up by ingestion of an intermediate host, which is a "creature" that has ingested infectious stage of the tapeworm or the egg.  The most common pesky creature your pet can get tapeworms from are fleas. Ingestion of fleas then allows the tapeworm to mature to the form you see on/in your pet.  Cats (or dogs) also pick up tapeworms from eating infected mice or rats. Humans typically pick up tapeworm from ingesting undercooked meat----not from their pet! But if humans, especially children, ingest fleas accidentally, or if the segments seen in your pets stool are allowed to mature for awhile into the egg stage of their lifecycle and a human  picks up dog or cat feces or grass/plants that now have been infected with eggs, then tapeworms are transmitted to that person. This ingestion can cause symptoms of parasitic disease or cysts within our tissues that can be very problematic!  IE...Keep your pets on flea preventative and wash your hands after picking up dog or cat waste.  Things we already know and hopefully practice.  See lifecycles below for more clarity:

See our Wellness Plans for the most comprehensive care for your pet!